LIFELINE (trailer) from A Fly on the 4th Wall on Vimeo.

She is a woman in despair who calls a suicide hotline not for help, but to say goodbye. He is the operator who takes her call, who must do everything he can to keep her on the line. Will he lose her, or will she find the will to live?

L. Marcus Williams was born in 1975, in the suburbs of Long Island, New York. As a child, he was inspired by his father’s love for classic cinema, and his mother’s success as a director of community theater. For fun, he would make movies with his friends in the backyard, using the family’s home video camera.

In 2002, he wrote and directed his first feature-length film, written by Franklin Mann, about a novelist struggling with sexual repression and writer’s block. It was made in accordance with the Dogme 95 Manifesto. He followed that with Scopophilia, in which he also starred as a man with an unhealthy obsession over his dead sister. The film premiered in 2003, at the Three Rivers Arts Festival in Pittsburgh, Pennsylvania.

In 2005, Williams moved to New York City where he gained some modest success as a freelance director for the stage. His one-act play, Role Play, won the Audience Favorite Award at the Short Play Lab in 2011. And in 2012, he directed an Off-Off-Broadway production of Neil LaBute’s Reasons to be Pretty, produced by the Ophelia Theatre Group.

Williams returned to the world of filmmaking in 2015, when he enrolled into the film degree program at Brooklyn College. His first two student films, The Monster Under My Bed and
Nail-Biter, were both released in 2017. The latter, about a lonely man who breaks into a woman’s apartment just to feel close to her, premiered on Amazon Prime Video.

Lifeline is Williams’ thesis film. It is based on his own experience as both a volunteer crisis hotline operator and a survivor of attempted suicide. In addition to winning a National Board of Review Student Grant for the film, Williams also earned Best Director and Best Editor Awards at the Brooklyn College Film Festival.

Williams is currently developing a silent film adaptation of Franz Kafka’s The Metamorphosis, and a feature-length film about an abusive family who discover that one of their own is a serial killer. He resides in Brooklyn, New York with his wife and son. 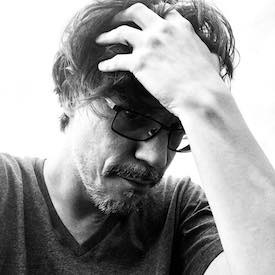