Desperate to escape their native Cuba in a time of turmoil, Marciel and his young sister, Perla, journey in the cover of nightfall, boarding a makeshift raft. Cobbled together by twisted metal and foam and propelled by an old Soviet car engine, their vessel is the only thing that stands between them and the open sea. Esta Niña Linda is a short film about survival, and the story of a brother and sister’s relationship as they trek 90 miles in search of the U.S.

In 2015 I found a raft with my father. We were coming back home from a fishing trip when we noticed something blue wedged in the mangroves of Cudjoe Bay. My father brought us as close as our boat could get, but as it got too shallow to go any further, I got out and waded to it. We knew what it was by now- a raft, often called a ‘chug,’ used by Cuban’s to escape the island. It was empty of people, but not of life. It was blue, thick with steel and instant foam. In the back sat an immense rusted engine from an old Soviet-born car. On the floor of the raft were sugar packets, containers of vinegar, and a little girl’s sweater. We towed the raft to our home, and I began to think about how to tell the story of Esta Niña Linda.

Traversing the Florida Straits in no easy feat in a real vessel, let alone a raft built by instant foam. The thought of the journey terrified me- knowing that Cuban’s had been sacrificing themselves to water and sun since the Revolution was humbling and captivating. I decided I wanted to tell that story, the very human one of people on a raft, stuck between a past and a future. I wanted to give a voice to the empty raft I found, and I wanted those voices to ask me difficult questions- about my family’s Cuban culture and history, about immigration, about sacrifice, about innocence and childhood and broken promises.

Nothing about Esta Niña Linda was easy. That is why I know it is special. I’ve put everything I am into this film, in the hopes that it would not be a film that had the right answers, but one that asked the right questions. 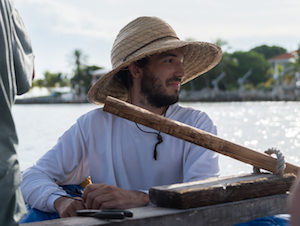