A hungry dragon chases after an oblivious grandma that is too focused on making her favorite apple pie to notice the death and destruction going on around her.

Camilo Castro
Camilo is a designer and visual development artist in the Animation industry. He was born in Colombia, he decided to study Multimedia Engineering. After realizing engineering wasn’t his calling, he decided he needed a shift in his life. He realized art was something that caught his attention, and started spending some time on it. After graduating from engineering, he decided to follow his passion for animation. He traveled to the USA to attend Ringling College of Art and Design in 2014. Quickly, he developed a passion for drawing and painting, which led him to focus on Visual Development. He has worked for Walt Disney Animation Studios and he is currently working as an artist at Pixar.

Ricardo San Emeterio
Ricardo is an animator, comedian and filmmaker currently working in the Animation industry. He was born in Mexico City and moved to New Jersey when he was 16. During his senior year of High School, he started performing stand-up comedy at NYC comedy clubs. Pursuing his love for entertainment, he sought to pursue a career in the Animation Industry. During the summer of his Sophomore year at Ringling College, he interned at Anima Estudios in Mexico City and helped supervise a remote animation team in India. The summer of his Junior year, he interned at Blizzard Entertainment in their Cinematics team, and did character animation for the in-game cinematic “Alleria’s Void Transformation” and Cinematic shots for “Dragons of the Nexus.” Additionally, he Cleaned up 85 motion capture actions for “Battle for Azeroth” and animated two tests and three cycles for training purposes. 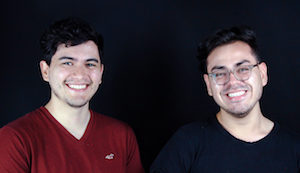