Brothers, a mother, songs from the seventies, Xanax, and a woman named Vicki. Stay Awake follows two teenage brothers through their weekly routine of finding their wandering mother and taking her to the hospital to detox from a prescription drug addiction. When it becomes clear that their mom may never get better, both brothers have to decide whether to remain in the cycle, or move on.

Jamie Sisley’s newest narrative short film, “Stay Awake,” premiered internationally at the 2015 Berlin Film Festival and won the Jury Prize at the 2015 Slamdance Film Festival. He will soon be premiering his first feature documentary,“Farewell Ferris Wheel,” which won the Creative Promise Award from the Tribeca Film Institute. It will air nationally on PBS.

Jamie recently completed commercial work for Seagram’s Gin and Nordstrom. He also spent a month traveling the U.S. to direct a series of documentary commercials for ATO Records, which featured interviews with Dolly Parton and Old Crow Medicine Show. He’s now in development on a narrative feature film based on a murder in the country music world.

Jamie earned a B.S. in Business from the University of Virginia and an M.F.A. in Film from Columbia University. He lives in New York City. 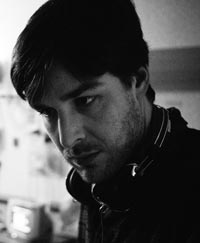