Mrs Lee, an elderly widow finds an unexpected visitor, an asylum-seeking girl, in her home. Mrs Lee must decide what is the right thing to do with her visitor before the police arrives. Inspired by a 2012 event, whereby 40 Burmese Rohingya asylum seekers arrived in the port of Singapore.

A versatile filmmaker with a penchant for bold visual storytelling, Kirsten Tan’s works traverse a range of genres, but are consistent in their humanity and off-beat humor. Being a bit of an adventurer, she was raised in Singapore but has lived in South Korea and Thailand before coming to NYC, where she graduated from the Master’s in Film Production program at NYU. There she was honored to receive the prestigious Tisch School of the Arts Fellowship.

Her upcoming feature film, Popeye, participated in the Berlinale Talents script station and was awarded the top production prize at the Torino Film Lab. Popeye is also one of 15 by invitation projects to be showcased in the distinguished Cannes Film Festival’s L’Atelier, which highlights the world’s up-and-coming talents. 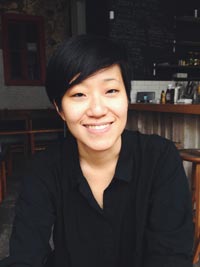