Opening Scene of Billie Jean from Brielle Mallano on Vimeo.

When Charlie’s plan to surprise a childhood crush with a pet hamster goes awry, can he count on his older sister to step up, help him out of the friend zone, and save the day?

Brielle Mallano is a Brooklyn based Filmmaker who’s work explores relationships between family and society in contemporary culture. She is an experienced Art Director having worked on a number of short films. She won an Outstanding achievement in Production Design award at the 2015 Brooklyn College film festival. She earned her BA in Film Production from Brooklyn College and plans to begin earning her MFA in Directing. She is a freelance Art Director and is currently writing a new short film. 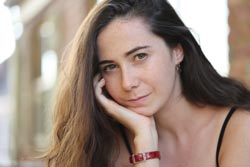