A Bolivian maid attempts to honor the last wishes of her late mistress.

Clara Roquet is a young writer and director from Spain. She grew up on a horse ranch in rural Catalonia but soon decided that she preferred books and films over horses, and graduated from Pompeu Fabra University in Barcelona with a BA in Film Studies. Her first screenplay, “S.L. Familia,” won a Special Prize from the Jury of the prestigious VIII SGAE Julio Alejandro Screenwriting Award. Her second script, “10.000KM,” co-written with director Carlos Marques-Marcet, won a Goya award, was nominated for the European Academy Awards and was short-listed as one of the three candidates to represent Spain at the Oscars after a successful run at major international festivals.

She recently directed the short film “El Adiós,” winner of the Columbia University Film Festival’s Best Director Award and SimonSays Award for Innovative Filmmaking, as well as a National Board of Review Student Grant Award.

Thanks to a full Scholarship from “La Caixa” Foundation she is currently pursuing an MFA in Screenwriting at Columbia University in the City of New York. 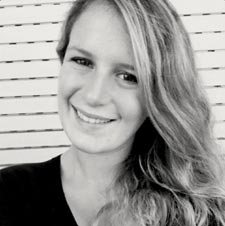