Set in a world where wishes are granted by mythical beings underneath fountains, an apathetic wish granter is forced to go above ground to grant a wish of love.

Echo Wu
Echo Wu’s personal philosophy is to be happy and make others happy. After leaving her hometown, Dallas, for the first time, Echo was determined to learn as much about animation as she could at Ringling. Through four years of rigorous workflow, Echo became absorbed into the delicate process of creating a CG story, from each aspect of the pipeline. Following her graduation, Echo interned at Blue Sky Studios as a production manager and hopes to one day be a Producer. Besides animation, her other passions include music, baking, and writing.

Kal Athannassov
Kal was born in Plovdiv, Bulgaria. He came to the United States at the age of eleven. Ever since he could walk he knew he wanted to be in animation and eventually was lucky enough to attend Ringling, where he studied Computer Animation. Braving all the elements the major could throw at him, Kal stayed strong and amassed an impressive list of work in pursuit of one day becoming an Art Director. Kal is currently a Character Artist at PullString, Inc. and hopes to be making more films in the future.

John McDonald
Originally from Massapequa New York, John remembers ever since he could hold a pencil he wanted to be an artist. When finding the perfect college, Ringling stuck out as a place where he could combine his passion for 3D character modeling, with visual storytelling. In the summer of 2015 he interned as a dimensional designer at Walt Disney Imagineering and after graduating from Ringling he interned at Hasbro as a 3D Modeler. 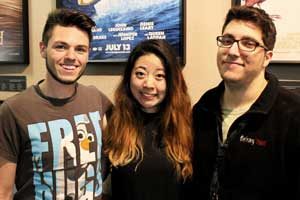