Nocturne In Black - Trailer from Jimmy on Vimeo.

In a war-ravaged Middle Eastern neighborhood, a musician struggles to rebuild his piano after it is destroyed by Jihadists.

Jimmy Keyrouz is an award-winning director. He recently graduated from Columbia University with Honors. His latest film Nocturne In Black won Jury Selects at the Columbia University Film Festival, a National Board of Review Student Grant, the Caucus Foundation production grant, the Marion Carter Green Award, the IFP Audience Award and is among the Student Academy Award semi-finalists.

Jimmy completed his Undergraduate studies in Filmmaking in 2009, and directed short films and music videos. In 2012, Jimmy joined the Screenwriting/Directing Master in Fine Arts program at Columbia University, New York, where he enrolled in directing, screenwriting, TV writing and directing actors classes. During his years at Columbia, Jimmy wrote two feature screenplays, a TV Pilot and directed three short films. He also served as teaching assistant where he taught directing and writing classes.

Jimmy is currently developing a one-hour TV drama and a feature script. 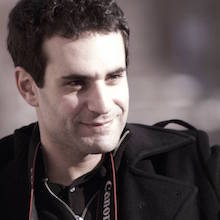