An obscure birth defect left Julian’s eyes highly sensitive to light. Consumed with a fear of the outside world, he receded into the shadows. When he hires Katherine, a short-term assistant, an unexpected friendship blossoms. But his carefully constructed world begins to destabilize when his feelings for her intensify.

Jeff Huston’s first introduction to storytelling came at a young age, wandering the halls of the National Gallery in Washington DC. In that quiet, safe world, associations that would define his filmmaking began to form. Some were literal, bold statements taken from the classics. But what truly engaged him was finding meaning in the less literal, in the works of the abstract expressionist and the minimalist. Sometimes you’re told a story, other times it needs to be searched for, discovered and revealed.

He began his career working as an assistant director on independent features, also earning credits as a writer, director, producer, cinematographer, editor and post producer. His first feature Off Off Broadway screened at fifteen festivals, winning honors at four. His latest film Running Condition is about a mysterious recluse who experiences first love. He’s always been drawn to characters who have problems they’re unable to overcome, either physically or mentally. The film is about the importance of friendship, human contact and meaningful connections. 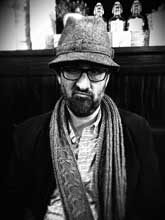