San Miguel tells the story of Ana, a devout 9-year-old girl that has to deal with the solitude that comes with having a mother who remains in a paralyzed state of grief. Unable to go back or move forward, Ana’s only hope is to alleviate the pain of her mother through divine intervention.

Based in LA. From Monterrey, Mexico. Cris Gris’ films have screened internationally in prestigious film festivals including Festival de Cannes. She is known for being multifaceted; moving between acting, writing and directing. She landed her first leading role in the feature independent drama Fish Bones (2018). Gris’ has written and directed various art and music videos which have been published in magazines such as Juxtapoz and nominated by MTV Latin America for “Video of the Year.” Her short film San Miguel (2018), received the renowned Spike Lee Film Production Fund, and a Hollywood Foreign Press Association Post Production Grant, followed by the Screenwriting Wasserman King Award. Most recently, San Miguel was named a 2019 National Board of Review Student Grant Winner. Cris Gris is currently developing her first feature film called White Shoes. 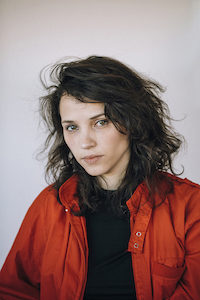