Jim Brenner, a former drummer, spent years away from his passion after being diagnosed with Early-Onset Parkinson’s Disease when he was only thirty. Now, he returns to his instrument, teaching others with the disease and finding solace through rhythms and community.

True to his midwestern roots, everyday “folks” are the subject of Kyle’s films; however, there’s more than meets the eye, as the everyday people in these films have far from everyday lives. From the tobacco fields of Cuba to the whetstone of weapons experts, Kyle captures the human element of those whose stories are seldom told, doing so in the most captivating light.

Kyle has directed films with subjects including: an electric cargo-trike company in Brooklyn, NY, an experimental theatre group in New York’s East Village, and a highly skilled blacksmith. While in school he was able to spend three months in Havana, Cuba where he produced “Field to Smoke” which was selected for five festivals including the 2019 Big Sky Documentary Film Festival. His latest film “Drum, Don’t Dwell” shares the story of a drummer who continues to play despite having Parkinson’s Disease. It received second place at the 2021 First Run Film Festival, and screened at the AMDocs and Manchester film festivals. 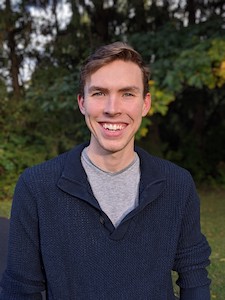