Deep in the desert, two enemy guards face each other: they yearn for human contact but remain separated by an immaterial border. Set along the Northwestern India-Pakistan border, Outpost is a glimpse into the absurdity and reality of this deadly sibling rivalry.

Shiva Bajpai grew up in Delhi during a period of radical transformation in the Indian socio-economic fabric. This has inspired him to tell stories about the contradictions surrounding emerging India. His first short The Singhs was selected in the 2009 OSIAN-Cinefan Film Festival, and his next film Raju has played at numerous film festivals including the prestigious 33rd Claremont-Ferrand International Short film Festival. Shiva is currently pursuing an MFA at New York University’s Tisch School of the Arts in Filmmaking. He was recently the recipient of the National Board of Review Student Grant, Hollywood Foreign Press Grant and the Spike Lee Fellowship. 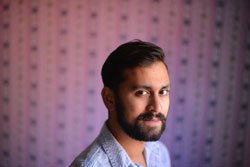