Brain Divided from JCubed on Vimeo.

Brain Divided is the story of an ordinary guy who meets a not so ordinary girl, but his brain cells can’t agree on just how to win her over, which leads to conflict and comedy!

Joon Shik Song
I’m a recent graduate of Ringling College of Art and Design who aspires to be an animator on feature films. I loved watching animated movies when I was younger and I never lost that love.

Joon Soo Song
My name is Joon Soo Song and I absolutely love animation and it’s power to entertain. Brain Divided was a pure comedic piece and my co creators and I wanted it to be as funny as the cartoons we all grew up with. We wanted to make people laugh and be engaged with our characters and their conflict. I learned a lot about comedy, animation, and film through this project and I’m excited for the next project!

Josiah Haworth
Ever since I was young I have been fascinated with animated films. I watched them obsessively and this fueled my love of art. I took as many art classes as I could and eventually stumbled upon an animation course at a local college. This small introduction to the world of animation drove to experiment on my own time with animation, realizing that this was what I wanted to do with my life! It was then I realized what I wanted to be when I grew up. 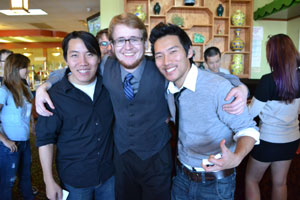