Sing a Little Song With Me - Small Version from Gabriel Urbina on Vimeo.

A cafe waitress and her hapless boyfriend must find a way to stay together, and stay alive, when a deranged romantic decides to force her to be the leading lady in a real-life musical.

Gabriel Urbina received a Bachelor of Arts in Film Studies from Wesleyan University, where he was also the recipient of the Leavell Memorial Prize, awarded annually to the senior who best reflects the departmental goals of citizenship, scholarship, and the wedding of theory and practice. His passion for filmmaking began at age twelve, when early exposure to Hitchcock left him permanently scarred. Since then, he has written a series of film scripts, plays, and short stories, as well as collaborated in the creation of a stage musical. Sing a Little Song With Me was his first major project as a director. He currently lives in Los Angeles.

Raised in San José, Costa Rica, Gabriel is continually looking for new places to visit and new challenges to tackle, both inside and outside his writing. He also loves small bookstores and musical theater more than is probably healthy. 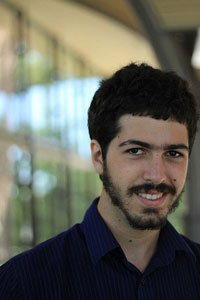