Adapted from Patricia Highsmith’s haunting story of same name, ‘A Mighty Nice Man’ is a tale of the destruction of a young girl’s innocence, as well as urban America’s predation upon rural America’s naïveté.

Jonathan Dee received his BA in Film Directing & Art History from Loyola Marymount University and an MFA in Film Directing from Columbia University. Upon graduation, he was meritoriously awarded a Sony TAG Fellowship for writing/directing. His film ‘Lily’ went on to win numerous awards including Best Director and Best Film at the DGA. Jonathan has directed narrative and commercial work around the globe for brands such as Audi, Elie Tahari, and a thirty second Chevrolet spot that aired during the 2014 World Cup. His latest project, ‘A Mighty Nice Man,’ is the current recipient of an HBO Development Award. 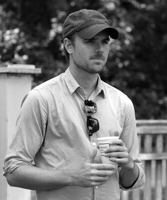