It’s 1972 in the hardworking steel town of Pittsburgh, Pennsylvania. Sixteen-year-old Joey has the chance to prove himself when his crush ends up at his house to watch the infamous football game between the Steelers and the Raiders.

Charlotte Glynn was born in New York and spent her formative years in Pittsburgh, Pennsylvania. The Independent magazine named her “one of 10 filmmakers to watch” in 2010. She received her MFA from Columbia University in 2013. Glynn lives in Brooklyn and spends much of her time submitting her two recently completed short films to festivals, developing her upcoming feature film, and teaching film directing at her alma mater, State University of New York at Purchase. 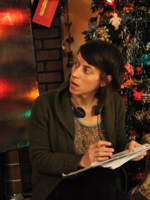