Frank-Etienne is a door-to-door salesman on a mission to sell empty boxes in the middle of nowhere. Things go awry when he meets a woman who is determined to take advantage of his kindness and his car. Unable to resist her, Frank-Etienne finds himself in an increasingly absurd situation with the woman, her lover, and his dog.

Before becoming a filmmaker and photographer, Constance studied literature and history at La Sorbonne. After receiving her MA she worked for four years as an assistant on theater plays and films in France. In 2010 she moved to New York where she entered NYU’s graduate film program. Frank-Etienne is her second-year film. It premiered at the 69th Venice International Film Festival and went on to screen in more than forty festivals around the world. Constance is presently developing “Frank-Etienne” into a feature film. 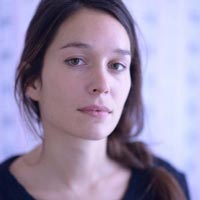