Late Spring is the story of Mahmoud, a petty clerk in a police station during the beginning of the Libyan revolution, who must suddenly chose sides when a tortured prisoner asks him for help.

Zachary Kerschberg is a narrative and documentary filmmaker based out of New York and Berlin. He holds an honors B.A. in Romance Languages and Literatures from UC Berkeley and a M.F.A. in Dramatic Writing from NYU. In 2008 he was a Fulbright Scholar to the United Arab Emirates. His films have screened at festivals such as Cannes, SXSW, Raindance, Rhode Island and Woodstock, and include special screenings at the United Nations and the Paralympics. Zachary is currently working on an ensemble feature that looks at the ‘problem area’ of Berlin’s immigration center; Neukölln. 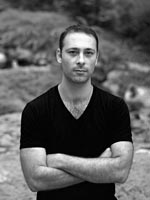