The following questions and answers are excerpted from a conversation that followed the NBR screening of Promising Young Woman.

How did the idea for the script originate?

Emerald Fennell: I had a few friends over for dinner and something uncomfortable had happened to one of the girls at the table on the tube on her way over. She was talking about it and all the other women around the table were talking about similar experiences they’d had, more run of the mill things. And all the men at the table—men we’ve been friends with for years—were just completely horrified by these things that women barely even mention sometimes. And then I realized that even though we had grown up together and known these men for much of our lives, we were living in completely parallel universes. So much of the stuff that the movie talks about isn’t often discussed openly and properly despite being so common. And I started thinking about how we would start this conversation.

All you really need is for your protagonist, your heart at the center to feel real

Carey, what was it like shooting the scenes where you go home with the various men?

Carey Mulligan: Those were really fun to shoot. There was a lot of communication between Emerald and I in those scenes. Some of the other scenes, like the ones with Beau where their romance is developing were a bit more free flowing. There was so much to manage in the scenes where she goes home with these guys, in terms of the way she is pretending to be drunk, what the person in the room with her is seeing, what the audience is seeing, how she’s feeling and at what point she turns. Every time we filmed one of those scenes, we were talking in between takes and trying different things. Emerald has such good taste that I felt so secure to go all over the map with it. The range of those scenes were quite big on the day we shot, but then we landed on things that worked the best. Because it is a blend of something so distinctly uncomfortable and also very darkly funny, I felt like it was something we really had to play with a lot and tackle together. But they were a blast. The first time Chris Mintz-Plasse gave me a little kiss on the nose, I couldn’t get through the take without laughing.

You dance seamlessly between genres in this film, conveying comedy and thriller and horror and romance at the same time. What sort of discussions did you have with the cast and crew about the type of film you were making?

EF: I think it helps that that’s sort of what my day-to-day life feels like. I think especially a lot of women can identify with that… how the fun and love are often intermingled with something much darker. Certainly, the revenge thriller genre is something I was always wanting to both have the pleasures of but also to undermine. It’s a difficult thing about genre. All you really need is for your protagonist, your heart at the center to feel real. And that’s why Carey is so amazing. What’s important in this film are the things that ground it and first and foremost is Carey’s performance. It’s completely true. We never wanted this to be an arch performance or some badass whip smart piece that we’ve seen before. It needed to be very truthful and to make sense in the context of her life. Then it was about making sure every decision we made was about reflecting the way that Cassie sees the world.

CM: I think I really go into films quite small, which is why I have no capacity as a director. I feel like such an actor for hire, particularly when I get an opportunity like this one. Because of the trust I had in Emerald, I didn’t concern myself with much other than trying to be honest. Any humor my character had was in the writing. We had conversations about the backstory, about who Cassie was before all of this started, and crucially, who Nina was. This was about love. This was about an act of extreme loyalty. I don’t think you can operate with the idea that you’re going to set out and exact revenge. She was trying to correct an injustice and couldn’t rest until that happened. Talking about the film this week, someone asked me “do you think she’s just a bit nuts?” and it tickled me because there are so many films where men go on massive revenge crusades over someone that they love and have lost, and never once have I heard them being described as crazy. I think that strength of love really roots the film. Emerald’s sentiment was that it was that sisterhood and that friendship that started Cassie’s journey.

The entire look of the film is amazing and I was really struck by Nancy’s Steiner’s costumes. What did the wardrobe say about Cassie?

CM: One of the things that I remember from our first meeting was talking about the look of the film. In the interim of reading the script and meeting Emerald, she had sent me this mood board that had all these beautiful pinks and fluffy things. She said she was not interested in making a film about a woman in a gray cardigan starting out the window. It’s going to look beautiful and be enticing; it’ll be a world you want to be in. And that excited me so much. And I think that’s what she delivered. It’s a film you want to watch. Not a film that you think you should watch because it’s important, though it is, but it’s also a world you want to be immersed in. In terms of Cassie’s psychology, it really was important that she looked completely in control. As someone who took care of their appearance with the hair and the manicures… that’s not someone you need check in on. All of that was very deliberate on Em’s part during conversations with hair and makeup and Nancy. Cassie is someone who, based on the outside, is someone you can really leave alone, she’s okay. She’s a little odd but you don’t need to worry about her. She’s really hiding in plain sight and looks completely unthreatening in a way that works to her favor.  Emerald would give feedback in all the fittings. It was a real collaboration. And then on the other side of it were these evening personas and the different outfits she wears when she’s going out.

EF: So much of it was Nancy. The people who came on board were amazing. We shot it in 23 days. It was a true independent film and you don’t expect to get these kinds of people, but it was a dream come true. What I love about Nancy, in addition to being so clever and insightful, is that she has a particular knack for a kind of subverted femininity. When you think of The Virgin Suicides and Lost in Translation and even Twin Peaks, there’s a kind of uncanniness to the way those women dress, which on the surface is tactile and feminine and appealing but also sort of not quite right. And that’s what she does. Some of the things she found for Cassie were just thrift store finds that you wouldn’t see anywhere else and on the surface they’re very lovely pretty things but there’s also something kind of strange about them.

The scene with Alfred Molina was one of the most moving in the film. Carey, what was it like working with him again on something requires you both to be so vulnerable?

CM: It was such a treat to get to work with him again, since I loved working with him on An Education. The great thing about Alfred is that he’s one of those actors where, when you hear he’s been cast, you never really know how he’s doing to do it. He was one of the actors we didn’t find rehearsal time for in advance because he was busy on our rehearsal day. It all came on the day we shot. What he does is so unnerving and so vulnerable and so passionate. His self-hatred is so intense and his desire for someone to literally lay a hand on him and grant him forgiveness is so massive. It was really affecting, every time we did it. When you work with someone like him you go in trying to raise your game as much as you can. I thought he brought so much history to a character that only has one scene and he has such a huge impact on the film. 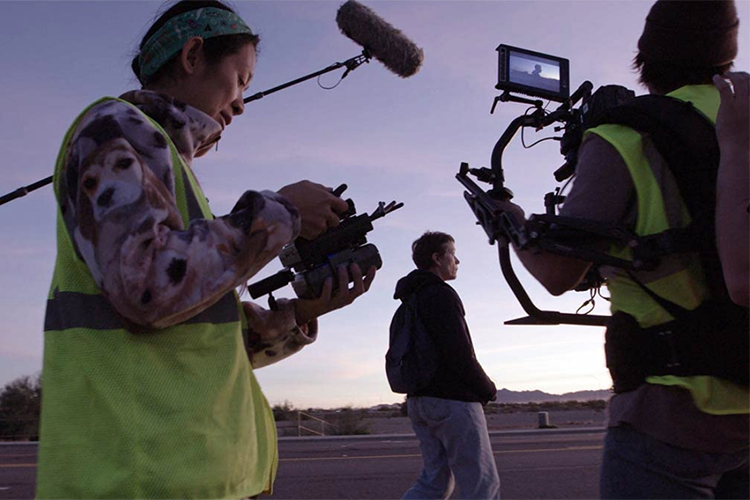