The following questions and answers are excerpted from a conversation that followed the NBR screening of Kajillionaire.

Can you talk about your scriptwriting and research process?

Miranda July: Writing can come with all sorts of weird blocks, so part of it for me is outsmarting those blocks. In the beginning, I put notes in a file as they come to me in any part. It can be something from the real world, whether research-based or a memory. I don’t love to get lost in other movies or research; it doesn’t appeal to me that much. But I do have a deep reservoir of Mission Impossible the TV show. I would watch it every night with my dad and my brother and I loved it… the peeling off of the mask and the good guys and the villains, it’s so intense and kind of Shakespearian in that you don’t know who to trust. That was all in my pocket while writing this film. I had grown up with it and it felt intimately entwined with my family. That anxiety level of Mission Impossible kind of matched the anxiety level in my family. In terms of when I’m writing, once I’ve amassed enough notes, I work every day, like a regular job (though it’s much easier when your kids are able to attend school!). And then I’m like, what part do I want to write today? I know the story enough, but I don’t write in order. Then I try to connect these different islands of the story, and it seems to be less daunting that way.

Old Dolio is such a great and unique character. How did you and Evan Rachel Wood work together to develop her voice and physicality?

Evan reassured me that Old Dolio was in there, soul-wise. I knew she was a great actress, but I did want to know that she connected to the character, which she did. We worked here, in my office. I got her some really baggy clothes. I felt like I couldn’t tell her to move in a certain way because that’s not where movement comes from; it really comes from your internal state. I used this process where I acted like a therapist and I interviewed her and asked her about her mom, all of these questions that I knew would make Old Dolio uncomfortable. At first she answered as Old Dolio, who didn’t want any part of this territory, and then I kept asking questions but told her she wasn’t allowed to talk, but that she could use noises and grunts.  And then we kept going. Then I told her no more sounds, just your body. Just knock things or do whatever you want. And she starting knocking books off shelves because her soul didn’t have a clear expression. I felt like that was the anchor to the physicality. And then we added language from the script, and Evan really kept this narrow communication output we had worked on and everything hung on that. And her low-register voice is real. She has a naturally low voice that she trained up to avoid vocal nodes when she sings. I don’t quite understand it but it was hers for the offering! I was like, can you do that for a whole movie? And it wasn’t even an issue. It so clearly helped her drop into the character.

The gas station sequence is such a significant moment in the film and really speaks to the rebirth of Old Dolio. How did you shoot that?

I had the pleasure of working on this movie with my great DP, Sebastian Winterø. We started a full year before we started shooting and he was in Copenhagen, he’s Danish. We did it like what we’re doing right now. We did 2-3 hour Skype sessions each week. We would assign ourselves different scenes and then we’d each bring different ideas to these sessions. He suggested that we do those pages—and it’s a lot of pages, from Old Dolio coming out of the bathroom to her crawling and Melanie—as a oner, without cutting. And to be honest, oners often seem a little macho to me, or they take me out of the movie. So I paused for a second, and I just imagined what it was going to be like and how wonderful it would be for Evan and Gina [Rodriguez] to just go, and not have to keep cutting and resetting. If the most essential thing is the performance there, I think that is worth anything, for them to get to live the moment continuously. But also, it had to feel different. You had to come out of that bathroom and feel the world had changed. And since the world hasn’t actually changed, the magic of film is that you get the change how the air feels. It’s a handheld camera and Sebastian is operating it and I think we (Me, Sebastian, Evan and Gina) are all people who work best when we’re on our edge. When it’s almost impossible, then we’re all like, okay, now I can really open it up. There were also multiple day players in that scene who never once messed up, they were really lovely too.  The rollercoaster that Evan especially goes through in that scene is something. Being reborn, then going to the mini mart, then realizing that she’s really hurt Gina and for the first time in her life, she doesn’t want to lose this person and doesn’t know what to do. It’s crazy how Evan pulls that off. I think she does it in a whole slow burn way over the whole movie, but that unit to me is so perfect. Then it’s sort of sets up how it’s one single movement from there to the end of the movie.

Gina Rodriguez is such a bright spot in the film, and seems to exist on a different plane than some of the other wonderfully odd supporting characters. When you’re writing, how do you calibrate these different levels of weirdness with your characters?

I feel that if everyone is weird, then no one is weird. It’s sort of airless. So you have to have a counterpoint. The hope with this was that this seemingly conventional character was actually more radical in regards to the emotional space she creates in the movie. The family can’t trust that an outsider might be inherently rigid, and not groundbreaking. I was playing with that and to be honest I just loved writing those lines and what Gina did with that part. She really is like this life force. She makes it look so easy that what’s she doing sometimes get missed, like the air or something. We just take it for granted. Gina is doing so much in this movie and she evolves and has so much depth, but she does it so lightly. I was blown away during shooting. I felt like she was this secret I was holding—that this person was such a phenomenal actress.

As far as different “densities” of characters you mention, I do it in all my work. It’s hard to speak to it articulately, but I’m glad you noticed!

The is the first feature you’ve directed that you haven’t also acted in. What advantages did that afford you?

I came to that simply because there was not a part for me, there’s no woman my age in this movie! That didn’t seem like a big deal to me; I’m often not in my books either. It was exciting. It just meant there was never going to be that point where I had an impossible job. The acting/directing job, I don’t know how it works sometimes. You’re like, I can either do another take or watch the last take, but I don’t have time to do both. That’s not functional! But you do it and it has its own magic. But this is all doable, that’s the difference. It’s like I have the space and time and the ability to see everything as opposed to half the movie happening over my shoulder when I’m in it. I’m a total control freak, hopefully on the side of joy, but it felt very nice. And also to be able to support my actors, in a way you can only do if you’re not one of them. I got to be “the mom” and not occasionally one of the other children. I may have been able to see my actors more clearly, to see what they needed and to give them more encouragement. I loved it. No regrets. 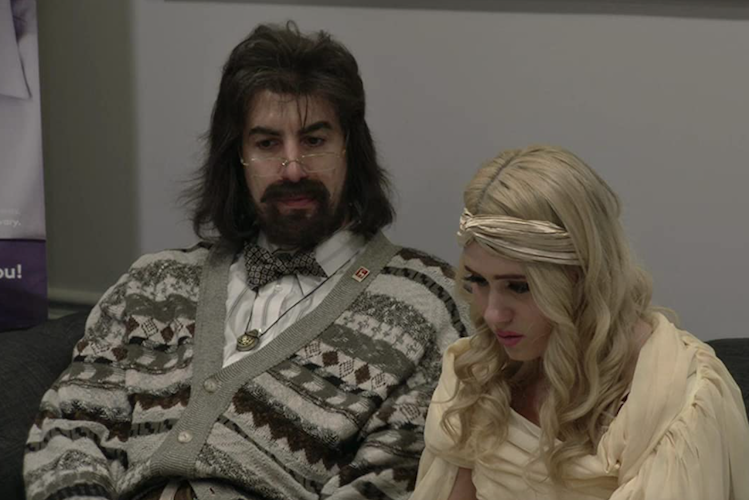