The following questions and answers are excerpted from a conversation that followed the NBR screening of Gravity.

When Alfonso brought you the project what was your initial reaction?

Can you talk about the challenges of acting in this particular kind of project?

Sandra Bullock: There was an incredible amount of different apparatuses that they brilliantly figured out in order to seamlessly connect this entire film together and to allow it to look like I was always in zero gravity. They were mini torture devices, but they were also so brilliant that after I stopped fighting it, I just made it part of the process: the misery of it, or the pain of it, or the longevity of it… you just made it your friend.

“Film is oftentimes considered a literary medium, and it’s actually closer to music”

Can you discuss how you approached your collaboration with Emmanuel Lubezki, who has been the DP for all of your films?

Alfonso Cuarón: Once we started trying to figure out how to do it, it became clear the technology we needed did not exist. So we started developing the technology according to certain principles: For one, it needed to be photo-real. It was not going to be like a comic book or fantasy rendering of that universe. And in order to do that, he was obsessed with the light. Because the light in space is unlike any light on earth, since there’s no atmosphere and there’s no filtering. We also wanted to continue our exploration of continuous takes that are about character and environment. Character and context have the same weight—one informs the other.

What was your approach in the editing room?

Alfonso Cuarón: I tend to edit my films because I consider editing a rewrite. Editing is just writing. I remember one moment in the editing room when I wanted to cut, and the visual effects folks said, “no no no… you cannot cut. There’s so much more of this shot.” And the thing is, as Emmanuel said at the time, this isn’t a, “look mom, no hands” kind of shot. This is about the shot needing to last as long as it needs to last. And honestly, I have no idea how long it lasts in terms of minutes and seconds. It’s a little bit like music, and about how a note only lasts as long as it needs to last.

Jonás Cuarón: I think something I’ve learned doing this film that’s very valuable is that film is oftentimes considered a literary medium, and it’s actually closer to music. And in writing, a lot of what we’re focused on is the meter and the rhythm, and I think the edit is where we fine-tuned that.

How do you feel about the audience finding out about the technology used to create this film before they actually see the film?

Alfonso Cuarón: I would much prefer it if audiences experience the film the way it is. And then later on, if they’re curious, certainly they can find that stuff out—it’s knowledge, it’s meant to be shared. Sometimes I think audiences want to know too much, but I guess that’s natural.
David Heyman: One of the things I love about this film is in that in some ways, the effects are invisible. You don’t sit there thinking, “ah, there’s a visual effects shot.” You’re there. And one of the great pleasures of the film is how immersive it is. This, for me, is a truly cinematic experience.
Sandra Bullock: At the time of the shooting, when I was suffering in all of those devices, I definitely wanted everyone to know how hard it was for me to do this! But then when I saw the film… I got lost. I have not had a journey that took me out of my head in a long time. So in this particular case, because it’s so revolutionary and beautiful, I think you should go in without any knowledge about it and educate yourself later on.
Jonás Cuarón: We always wanted an immersive, roller-coaster ride. And if information is going to take away from this ride and people are going to be seeing the bolts… then I’d prefer it if people didn’t know too much about how it was done. But in the end, because the emotional journey is carried by Sandra, just seeing the character of Ryan, you’re going to forget about the effects and just go along for the ride. 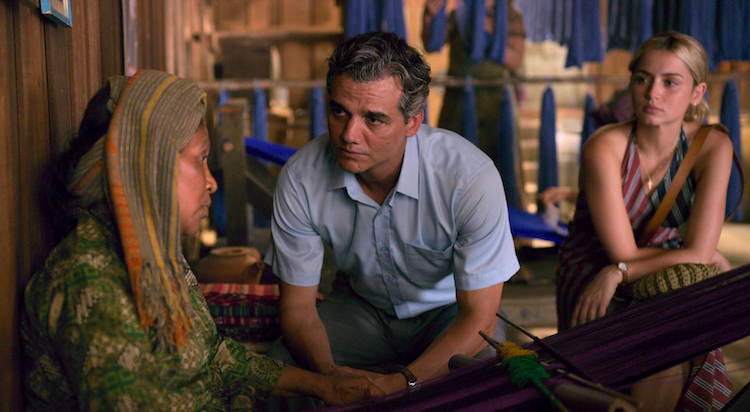